There are two million freelancers in the UK alone with the number set to rise. Add to this the growing numbers of SMEs looking for places of business and it’s easy to see why co-working spaces are so popular.

With simple contracts, access to a variety of workspaces, networking events and high-speed internet, working from home is no longer the luxury it was once considered. Add to this the inspiration provided by an entire floor of people working on a wide range of projects, it would appear to offer all the advantages of a conventional business workspace without any of the downsides of having a boss breathing down your throat.

Co-working spaces provide office space for a range of clients from individuals to huge companies. The flexible nature of contracts means that businesses don’t have to commit to expensive and long term tenancy agreements, nor do they have to run the offices themselves. Instead, they can turn up in a co-working space and simply get on with their work.

In this article, I’m going to explore the advantages and disadvantages of using communal workspaces as networking hubs. Are they a good opportunity to network with like-minded people or do they leave us exposed to the office pest?

Why people use co-working spaces

Co-working spaces have become a popular service for individuals and SMEs. The spaces offer:

The co-working space We Work, as with many similar spaces, put a great deal of emphasis on connections that its users can make and promotes the concept of community.

An environment where you are surrounded by professionals in a variety of businesses seems like a great thing. Certainly, connections can be made over coffee in the communal kitchen and, more rarely, eureka moments during a discussion with someone in a completely different field over table football.

Co-working spaces make a point of encouraging social interaction between its clients, providing welcoming kitchen areas to relax and have a cup of coffee or even games rooms to have a beer and unwind. In theory, it is up to you, as the worker, what amount of engagement you have with other workers in the space and areas are often designed with this in mind.

For example, there are often booths to conduct phone-calls in to give yourself privacy and limit the disruption in the main area. There are also more private offices, desks away from the doors and thorough-fairs of the room that provides slightly less privacy and a minimal amount of buzz…. All the way up to the kitchen area where conversation is likely and distractions inevitable.

This is all well and good, as long as you manage to get the desk that you want.

Though research indicates that non-territorial desk space leads to more physical exercise, there is also evidence that this isn’t necessarily due to people talking and collaborating.

Furthermore, it was suggested by a study at Delft University of Technology in 2004 by Theo van der Voordt that not only did productivity not increase in co-working open plan areas, but it led to territorialism and all the stress and conflict associated with it.

Conflicts in ethics and deadlines

Another consideration is the variation of work ethics between individuals, bad enough when in an office working with colleagues for a single business, but put you in a room of many businesses with various modes of working and conflicts can arise.

If you are a business that relies heavily on telephone time to speak to clients or suppliers, for example, you can make calls from the quiet booths for the very purpose. On the other hand, if you work as technical support, you will be receiving far more calls than you place meaning you either need to spend the whole day in a cramped telephone booth, remain in the open plan offices disturbing fellow workers or rushing back and forth between your work station and the booth like an indecisive superhero.

Yet another issue to consider when in the workspace, is the variety of deadlines. In most large business offices colleagues will most likely be aware of deadlines if not also working to them, whereas in a co-working space for individuals no one is aware that this person is about to close a deal or is just about to submit a large piece of work.

The psychological strain of shared spaces is bad enough when everyone is working to the same ends, but put people close together with different work values, deadlines and needs for privacy and sparks may fly.

So, how should we actually behave in such an environment? How do we avoid coming under the scrutiny of the self-appointed ‘noise police’ whilst maintaining civility with fellow space users?

Use the spaces provided

In an ideal situation, you should find the room suitable for your purpose. If it is a meeting, for the secrecy of your groundbreaking IP, you should use a private room, likewise with telephone conversations.

Many space users wear headphones both as a way of drowning out any extraneous noise and flagging a sign to all that they don’t wish to be disturbed.

For the most part, the shared working space is self-regulated. There is no ‘Boss’ to come out and shout at shirkers or people messing about. Instead, it is down to the space users themselves to deal with their own. Luckily we live in a fairly civilised age and such self-governance has not yet descended into brutality, still, dealing with someone who is more interested in wandering around and chatting to people than getting on with their own work can be a problem.

In such cases, you have a few options. Ignore them until they leave you alone, hope that someone else will put them in their place or kindly but firmly explain that you can’t chat as you’ve got work to do. Naturally, the last option is the best as it will inform them of your boundaries which they will then be able to, hopefully, respect.

Much of the time such encounters are caused by awkward social interactions where boundaries are not yet set. By stating yours in firm yet kind terms, you can save yourself a world of bother down the line.

Finally, if the person is refusing to respect other workers in the space and is disrupting fellow space users, the best thing to do is speak with the management of the co-working space who can then take charge of the situation.

As you expect people to respect your work ethic and boundaries, you need to respect others. Try to avoid engaging with people in long conversations in the work areas, sometimes people are just too polite to ask you to get lost, so remove that issue for them by exchanging a couple of pleasantries and then doing what you are there for, working. Most co-working spaces provide ample places and events for space users to network either in a social or professional way.

It can be tempting to get into conversations with people but, you must remember why you are there. Organising to talk later during lunch or over some post work beers is both a polite way of postponing the conversation whilst also not keeping others from their own work.

Having said all of this, co-working spaces are very popular. They provide an environment that, for the most, inspires you to work, provides a place to collaborate and gives you space away from home in which to focus away from other distractions.

Co-working spaces address the solitude that freelancers or members of an SME may feel when working from home, and though productivity may not necessarily increase in a co-working space, if approached right, it can be a fun and inspiring environment. 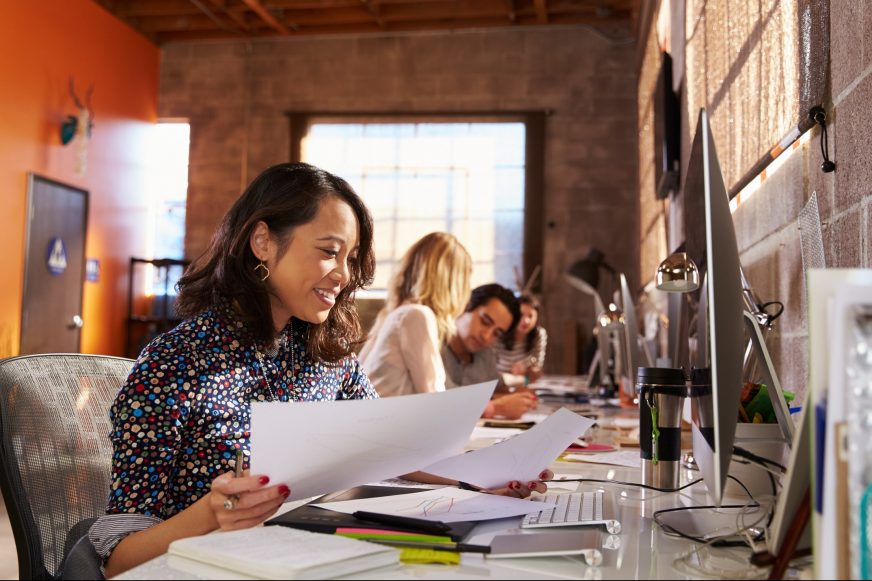 The roundup: Some of the coolest UK co-working spaces for small businesses and entrepreneurs