In a world increasingly dominated by internet memes, in an age when viral content can become a news story in its own right, it’s not surprising that people expect more from brands these days.

Smartphones put entertaining content at our fingertips, and if brands come across as boring, it takes seconds for someone to hit ‘unfollow’.

Little wonder, then, that we’ve seen a rise in brands using humour as a means of keeping the attention of their audiences – and reaching new followers.

Numerous studies have shown that people are more likely to share funny content. After all, we all know that laughter is contagious; it’s just human nature that when we see something funny, we want other people to enjoy it too.

But how can your business capitalise on the power of humour to help bring in more customers? We cover a few ideas in today’s post, can you implement these for your business?

Lastly, make sure you approach humour with an edge of caution – you’ll find our top things to remember at the bottom of this post.

Seen a funny meme or video with some connection with your business? If you think your audience would love it too, why not share it with them!

For example, if you’re a farm shop, you could share the hilarious video of a chicken playing the keyboard on America’s Got Talent. Your posts don’t necessarily even need to be connected with your business, provided you’re talking about something that your target audience is likely to relate to.

Innocent is famous for its humorous social media presence, showcased here in some recent funny Facebook posts that play on the British love for talking about the weather: 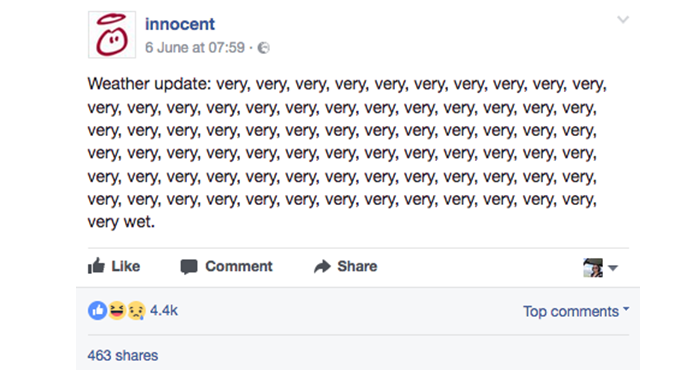 Trending topics on social media can provide a good opportunity for brands to make humorous responses with the potential to be seen by a much bigger audience than normal.

A great example of this was the response to Donald Trump’s recent baffling “covfefe” tweet, when numerous brands came up with witty responses. Oxford Dictionaries had this, in the style of its normal ‘word of the day’ tweets, and it gained hundreds more retweets than normal: 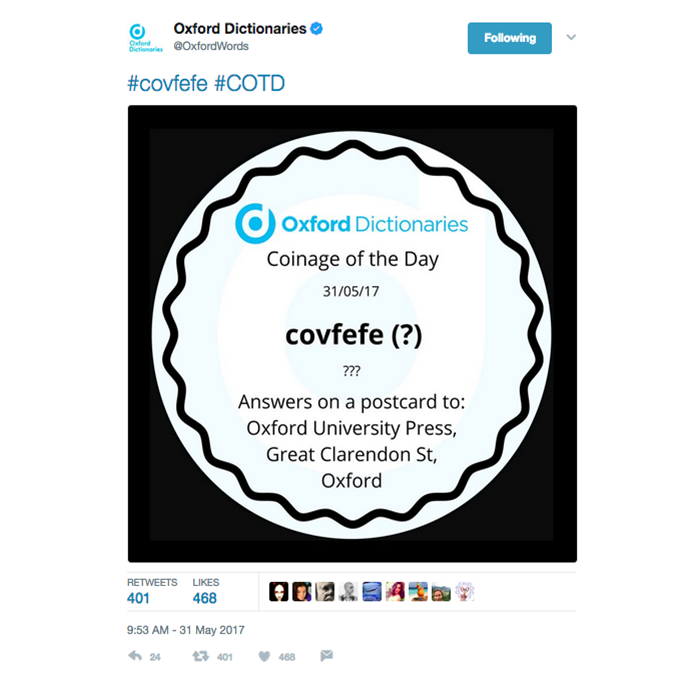 And it’s not just social media that provides an opportunity for topical humour. Here’s a marketing email from Ryanair, sent out after the general election and full of amusing election-related puns: 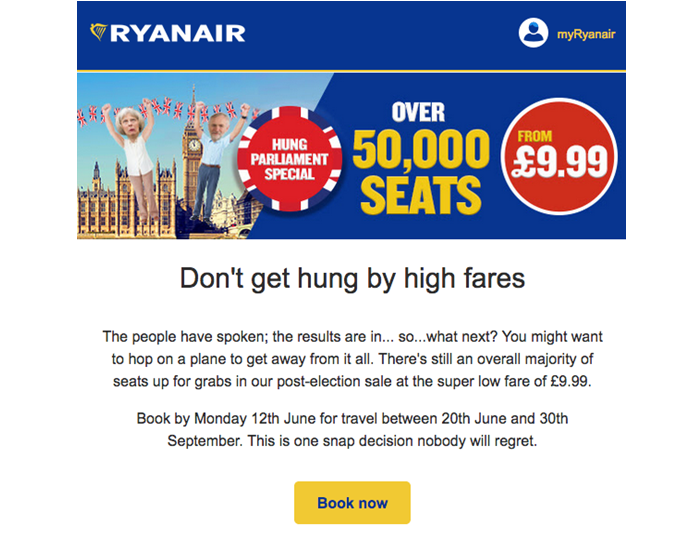 Don’t be afraid to use a playful tone of voice

Simply adopting an easy-going tone of voice can be humorous, as many people are still surprised when brands sound like human beings.

As Innocent has shown, writing in a natural, conversational tone of voice fosters a human connection with the people you’re marketing to.

This example from Skyscanner is simple but effective, making us smile because it’s a thought we can all relate to. 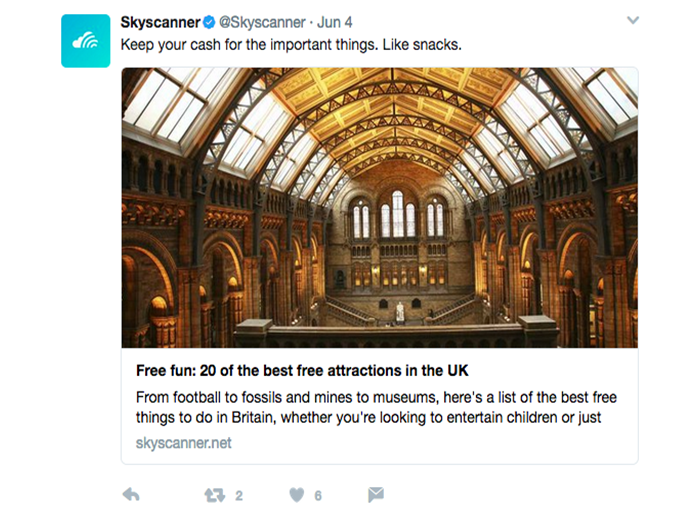 Banter with customers – or competitors

While it may not immediately seem to constitute marketing, some big brands have found that engaging in some entertaining banter with their customers or followers on social media has been a sure-fire way to draw attention to themselves – in a good way.

Take this example from Sainsbury’s, which turned into a long and witty exchange of puns between a customer and the official Sainsbury’s Twitter account: 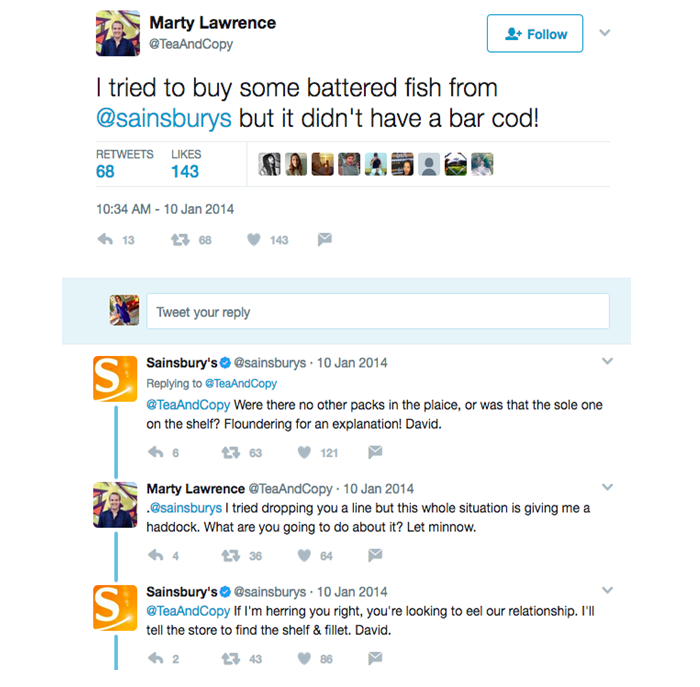 There are loads more examples of this, and they’re funny because they’re so unexpected; we expect brands to issue dull, corporate responses that cover their backs and don’t give too much away.

It’s not just customers you could engage in witty repartee with. A bit of banter between competing fast food giants Wendy’s and Burger King went down a storm on Twitter, showing that a little friendly rivalry between competitors can provide plenty of amusement for onlookers.

And when they’re amused, they share – giving you some free publicity and showing your human side in the process.

Be edgy or controversial

While you obviously don’t want to be too controversial, and you need to be careful to avoid offending and alienating your target audience, another way of injecting some humour into your marketing is to be a little edgy.

The Dollar Shave Club did this to great effect in its hugely popular promotional video, which used a bleeped-out swear word in its core message about the quality of the company’s razors. 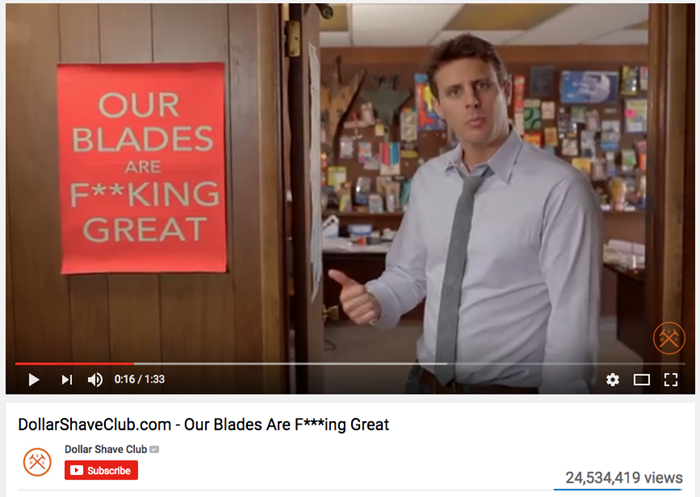 The video went viral, bringing the start-up such success that it went on to secure a $1 billion acquisition.

We’ll end this post on a note of caution. Humour – and particularly edgy or controversial humour – needs to be approached carefully in the world of marketing.

You probably don’t need us to tell you that sometimes attempts at ‘humour’ can badly misfire, resulting in a PR disaster for the hapless brand.

Gaffes like Adidas’s insensitive Boston Marathon email subject line are a reminder to be very careful that your message can’t be taken the wrong way. Here are a few things to remember before you go in all guns blazing:

To sum up, humour can be a great way to get your message across, because it’s more likely to stick in someone’s memory if it’s raised a smile or a laugh. Just make sure it’s memorable for the right reasons.